Nowhere in the world brings to life Silk Road caravan routes like Uzbekistan – the golden light of sunrise over 900 year old minarets, the air of a chaikana ripe with spices and sizzling meat, and the cries of hawkers in restored covered bazaars as they advertise their wares (though these days they tend far more towards souvenirs than Silk). Travel in Uzbekistan engages all the senses – including a sense of wonder popularly embodied by the closing lines of Flecker’s Hassan.

“We travel not for trafficking alone;
By hotter winds our fiery hearts are fanned:
For lust of knowing what should not be known,
We take the Golden Road to Samarkand.”

Seemingly a step back in time, particularly in the early morning hours when the sound of a push cart on cobblestone streets cuts the air or the dust of an early-rising family sweeping the streets lights up in the angled sunlight, a walk through the old towns of Uzbekistan evokes empires risen and fallen.

Samarkand, once the capital of Timurlane’s empire, still largely defines the very idea of a Silk Road city for visitors to Uzbekistan. The Registan Complex, three massive medressah buildings surrounding a central square, dominates the historic center of the city, though the nearby Gur-i Amir tomb of Tamerlane and Shah-i Zinda mausoleum complex are equally ornate. By contrast the ruins of the Bibi-Khonum Mosque, while no less beautiful, are evocative of the fallen empire of the once-great Timurids.

Buhkara, in comparison to the few major restored buildings of Samarkand’s center, is a living city dotted with ancient buildings. From the covered merchant domes that define the city’s layout to the historic Jewish quarter where traces of the once-thriving religious group can still be spotted, the old and new mingle in Bukhara as locals and visitors alike incorporate them all into daily life.

Khiva, the third great Silk Road city of Uzbekistan, is more of an open-air museum. Surrounded still by the ten-meter walls of the Ichan Qala fortress, the base of which is believed to date to at least the 10th century, the inner city is a maze of restored madressahs and mosques interspersed among modern family homes and converted caravansaray hotels. 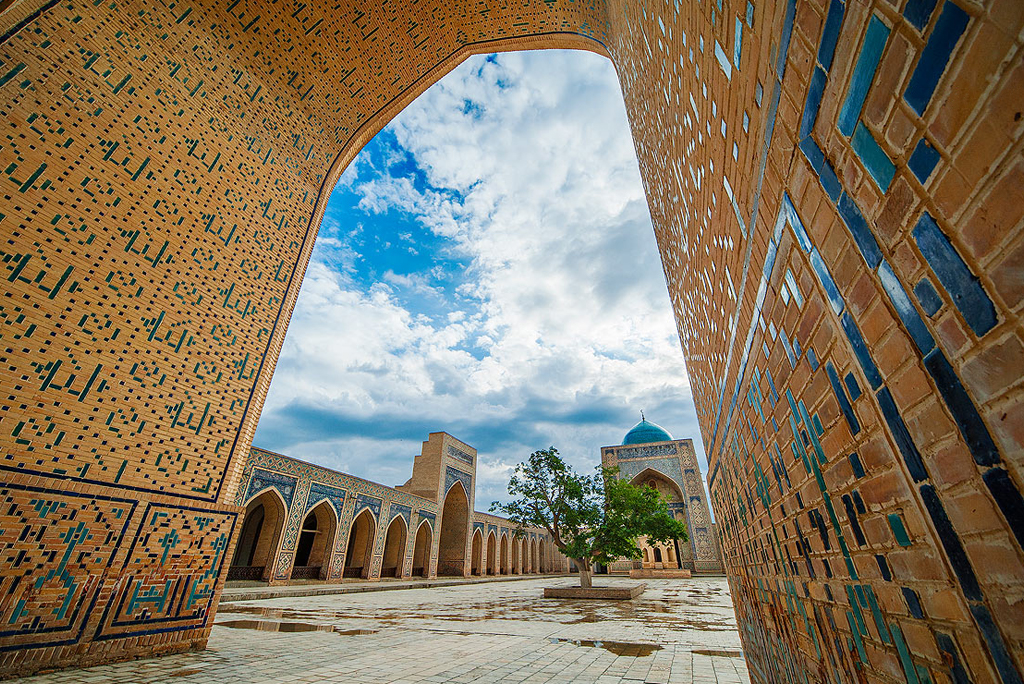 Things to do in Samarkand

An Exhaustive Travel Guide to Uzbekistan

15 Awesome Things to Do in Samarkand 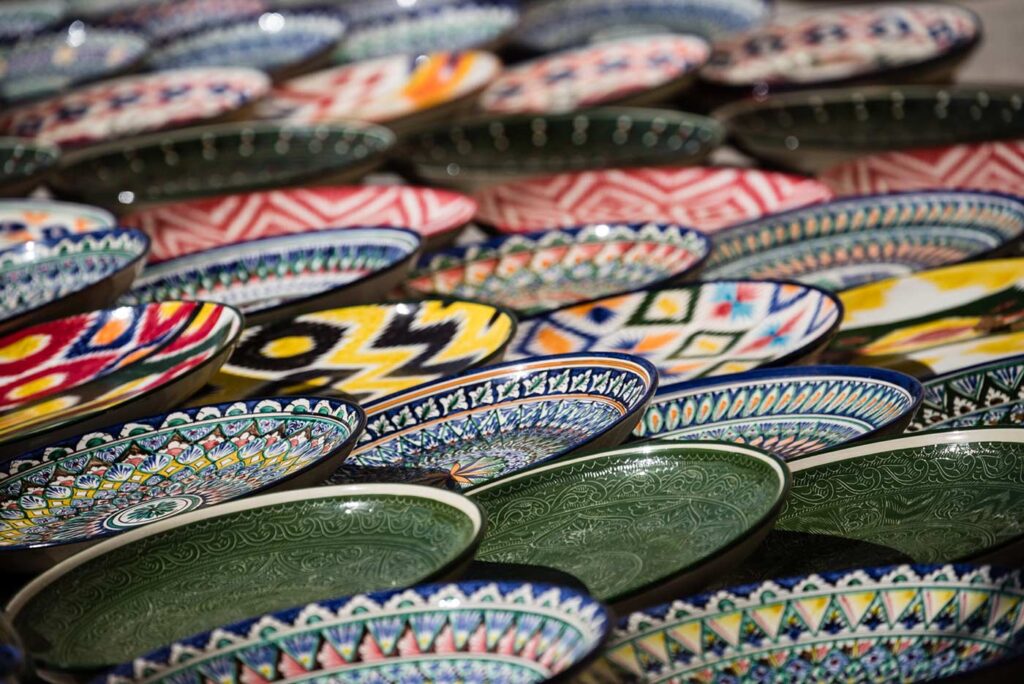 Ceramic dishes for sell at a souvenir stall in Samarqand.
© Stephen Lioy

Travel in Uzbekistan exposes visitors to an endless array of colors, patterns, and crafts. Brightly-tiled mosque and medressah walls compete for attention with intricately-embroidered syuzani and hand-painted ceramic dishes. Uzbekistan’s artisans are justifiably famous for their craftwork, often associated with the Timurid period and early-1400s religious buildings that represent much of the country’s architectural heritage in Samarkand, Bukhara, and Khiva.

Architectural forms of Uzbek craftsmanship include decorative elements like delicate ganch (stucco) carved in intricate patterns – used widely in historic state structures but often present as well in private dwellings and everyday buildings – and glazed polychromatic ceramic tiles used for ornamentation of walls and ceilings.  Most famously used on mosques and medrassahs of the Timurid period, these designs are now popularly incorporated into many tourism businesses such as hotels and restaurants as well.

Decorative ceramics are popular for practical use and souvenirs alike, with a wide range of dishes and statuettes widely available. Glazing colors can often be used to identify the point of origin of ceramics, with those from the Ferghana Valley and Khorezm regions favoring a blue/green/white color scheme while items from cities such as Tashkent, Samarqand, and Bukhara tends towards red/green/yellow patterns.

Embroidered fabrics are popular items of clothing and decoration among locals and tourists in Uzbekistan, with suzani decorative textile hangings (typically decorated by patterns specific to each region of the country) the most commonly-found in the markets of Uzbekistan’s tourist destinations.

Guide to Shopping in Uzbekistan

40 Photos of Uzbekistan to get you Silk Road dreamin’

As befits a country at the heart of historic trade routes, the cuisine of Uzbekistan shows influences from across Asia and the Middle East in spices and ingredients, though the communal tables on tapchan raised seating platforms is essentially Central Asian. Food is an important element of social cohesion in the country and culture – locals gather at family homes and chiakana teahouses to break fresh non bread, share massive portions of grilled shashlyk meat or palov, and cut up the country’s famously-sweet melons for dessert. In fact, in 2016 UNESCO even added Uzbekistan’s ‘palov culture and tradition‘ to the list of Intangible Cultural Heritage of Humanity’ in recognition of  the important role it plays in culture and community. For first time visitors, a few most-common iconic dishes are definitely worth seeking out.

Palov – Widely seen as the national dish of Uzbekistan, palov (also plov or osh) is a rice dish simmered in spices and meat broth in a large kazan pot. The exact ingredients of the dish vary widely across the country, so it’s well worth trying at least once in each new city.

Shashlik – Grilled meat in Uzbekistan comes in many varieties – beef and mutton are the most popular, but chicken and even horse can be found as well. Stuff it all onto a skewer, grill it on an open flame, and enjoy it with a side of vinegar and raw onions.

Norin – Handmade pasta cooked in horse-meat broth and served with a topping of shredded horse meat. Though less common in cafes and restaurants, norin is popular in at-home gatherings of friends and family.

Samsa – Uzbekistan’s favourite street food, layered dough stuffed with meat (typically mutton) and/or vegetables are stuck to the side of a tandoor oven and baked over a wood fire.

For travellers, all this means that their taste buds will be spoiled for choice in Uzbekistan. Fresh seasonal salads that taste like they’ve been picked right from the fields, savory meat dishes grilled to perfection, dumplings of many forms (Soup? Got em. Fried? Got that too!) stuffed with all sorts of goodies, and the freshest and most flavourful fruit that could be hoped for (also a treat when dried and sold in local bazaars). Combined with the country’s colourful ceramics and intricate embroidery (widely adopted to make restaurants even more atmospheric), every meal can be a delight for foodies and photographers alike. 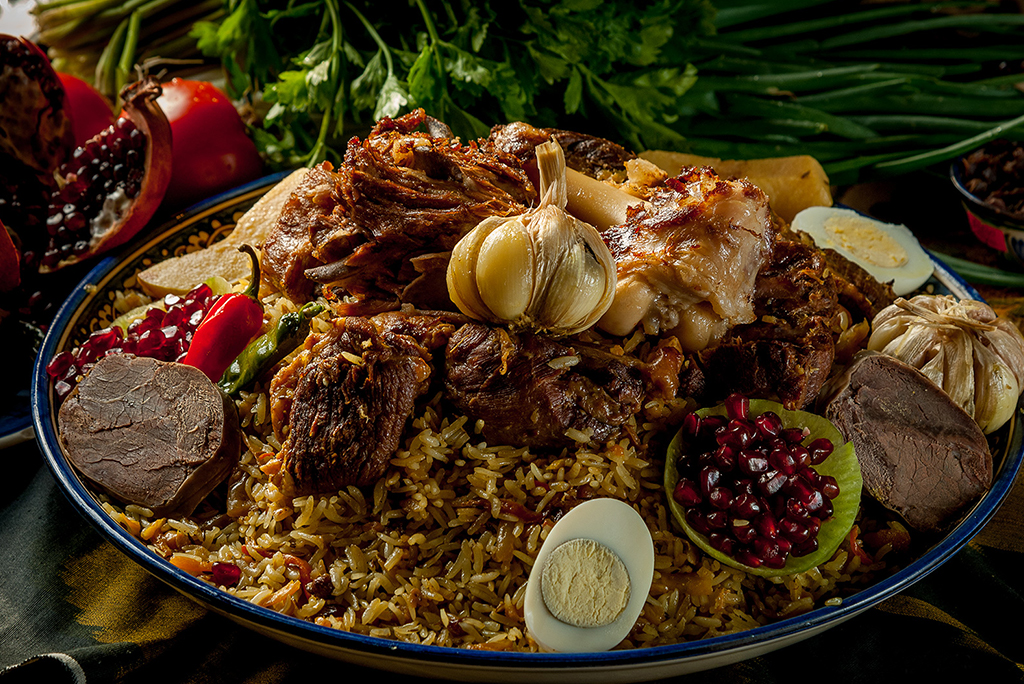 Uzbek cuisine is a vibrant mixture of flavors and colors.
© Ernest Kurtveliev

Highlights of Uzbekistan – 14 Days of Meat, History, and Hospitality

Food in Uzbekistan: 21 Traditional Uzbek Dishes You Must Try

Uzbekistan is a resource-rich, heavily populated country (33.5 million people), strategically located in the heart of Central Asia. The nominal Gross Domestic Product per capita in Uzbekistan was last recorded at 50 billion US dollars with 250 billion purchasing power parity (PPP). Currently, the Republic’s economy is the second fastest growing in the CIS, with an indicator of 5.1%.  According to the Asian Development Bank, GDP growth in 2020-2021 will be about 6%. In 2019 Uzbekistan was among the top 20 countries in the world in terms of improving the business environment.  The rank of Uzbekistan improved to 69 in 2020, up from 166 in 2012. In the 2020 ranking, Uzbekistan scored highly in protecting minority investors, paying taxes, enforcing contracts and international trade.

In accordance with the Decree of the President of the Republic of Uzbekistan “On measures to further improve the mechanisms for attracting foreign direct investment in the economy of the republic” dated April 29, 2019 № PD-4300 foreign investors are offered state shares in 29 large enterprises, including 4 financial institutions, 2 from energy sector, 6 oil and gas, 3 chemical and other industries. Also, Uzbekistan introduced a visa-free regime for tourists from 86 countries of the world. As a result, there has been an increase in the flow of foreign visitors from 1.9 million to 5.4 million people.[1]

The introduction of free currency conversion, the reduction of trade barriers and customs payments has significantly increased the volume of trade by 37% compared to 9 months of 2018, while exports grew by 45.5% and imports by 31.5%[2]. More information about Uzbekistan’s investment climate can be found in invest.gov.uz