Many tourists have seen fantastical videos of Turkmenistan’s burning gas crater, marvellous marble capital, and myriad archaeological ruins in the middle of dramatic desert landscape. Few have seen these marvels in person, however, and the country’s tourism industry remains nascent. While getting a visa can admittedly be a bureaucratically difficult process, the payoff is huge for those few visitors that travel Turkmenistan.

Once the richest city in existence and referred to as “Queen of the World”, ancient Merv is believed to have been home to at least half a million residents in 1200 C.E. before an abrupt decline when the Mongols arrived in 1221 C.E. and decimated the city. Urban settlements have existed on this site since at least the 6th century B.C.E., rising and falling in turn as a result of banditry and warfare, and the oldest artifacts found on-site are around 4000 years old. In total, the ruins of five distinct settlements from five distinct periods can be seen on site, and while no others matched the city at the height of the Seljuk era in the 1200s, all have left some mark on the landscape of this oasis that has been host to humanity since even before the Silk Road trade routes incorporated it as a major stopping point – the addition of Ancient Merv to UNESCO’s World Heritage list in 1999.

Of the remaining ruins, the most recognizable is the Uly Gyz Gala, a remanent of the great Seljuk iteration of Merv whose exact purpose has not been passed down to modern times – one colorful local legend says that these high fortress-like walls were built to protect the purity of a group of unmarried women who lived inside. Similarly impressive, the heavily-restored mausoleum of Sultan Sanjar was once the heart of the Seljuk city – the Sultan was renown as both a warrior and patron of arts and poetry, and historical writings claim that the blue-tiled roof of his mausoleum was visible for a full day’s ride before arriving to Merv.

Located on the outskirts of the modern city of Mary, the mausoleums and mosques of the ancient cities here are still important religious and pilgrimage sites for the faithful, and tourists have a unique opportunity to see the continuity of religious traditions that have been practiced here for a thousand years. Wandering through the ruins of Merv can occupy a full day, or more for keen amateur archaeologists looking to explore the site’s wide scope and lengthy history. 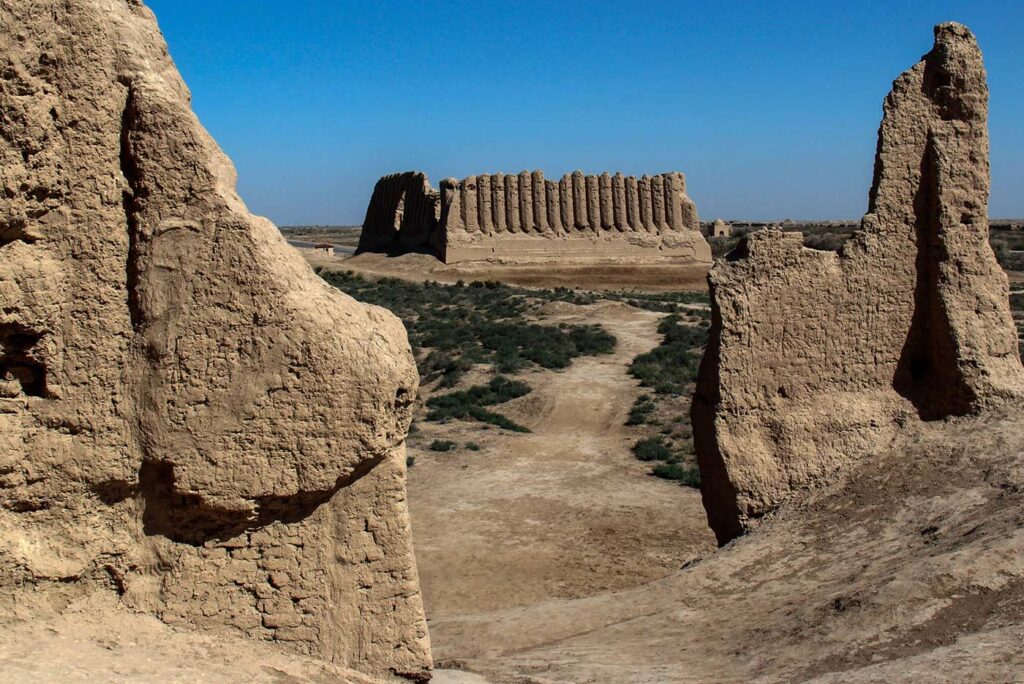 The ruins of the ancient city of Merv, including the largely-intact structure of the “Uly Gyz Gala” in the background.
© Stephen Lioy

Lost Cities: How the magnificent city of Merv was razed – and never recovered

Explore the lost city of Merv 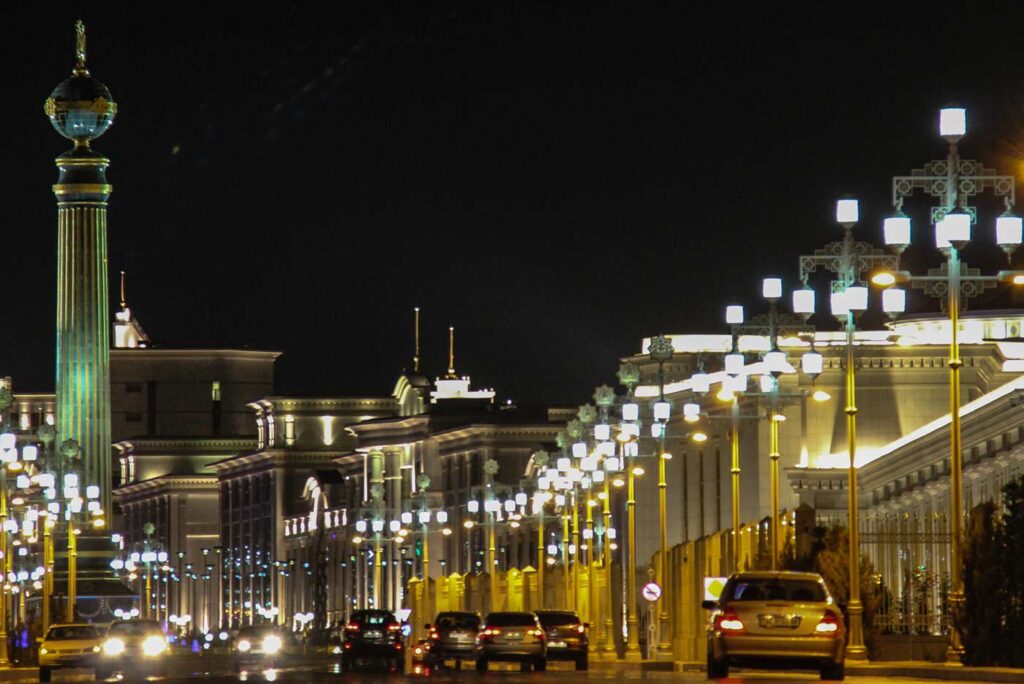 Rising like a mirage from surrounding deserts, Turkmenistan’s capital city Ashgabat is one of the most remarkable in the world. Wide boulevards intersect at roundabouts that feature shining golden statues or roaring fountains, massive parks highlight legends of Turkmen history ancient and modern, and shining white marble bedecks the facades of building after building across the city. In fact, the city is record-breaking – Ashgabat holds three Guinness world records for: highest density of marble-clad buildings, largest indoor Ferris Wheel, and public place with the largest number of fountain pools; in addition the city has claimed the record for the world’s largest building in the shape of a horse. Any stroll through the modern streets of the city is a source of amazement, but a few of the most iconic buildings are worth going out of the way to see.

The Monument of Neutrality, located in the suburbs southwest of central Ashgabat, is a 75m three-footed plinth topped by a 12m statue of former-President Saparmurad Niyazov that originally rotated throughout the day to face the sun. On some occasions, an internal panoramic viewing platform is open to visitors.

The Palace of Happiness – colloquially known as the ‘Wedding Palace’ is one of the most iconic buildings in the city. A series of three eight-pointed Turkmen stars is topped by a cube composed of Turkmen stars surrounding a 32m globe upon which is a map of Turkmenistan.

The Alem Cultural and Entertainment Center – record-holder for the ‘largest indoor Ferris Wheel – a 47.6m working amusement ride inside an enclosed 57m high steel and glass casing. The wheel is typically open to the public for riding, and views across the city are quite panoramic.

The newest of Turkmenistan’s grand constructions, Ashgabat International Airport in the shape of a Turkmen Falcon has been recognized by the World Record Academy as both ‘largest bird-shaped building’ and ‘largest wingspan building’. For many visitors, it will be the first of many strong impressions upon their arrival to Ashgabat.

What to see with a spare day in Ashgabat

For many travellers familiar with tourism in Turkmenistan, the defining image of the country is a bright fiery glow erupting from the desert floor, the only light for many kilometers under the sparkling sky of stars. The gas crater at Darvaza, iconic and photogenic though it may be, is far from the only attraction in the deserts of Turkmenistan – which cover around 80% of the country’s lands. From the Karakum (Black Sand) Desert between the Caspian and Aral Seas in the west of the country to the Kyzylkum (Red Sand) Desert and mighty Amu Darya river in the east, Turkmenistan’s deserts are teeming with nearly as many historic, cultural, and natural attractions as grains of desert sand.

The underground lake at Kow-Ata, fed by naturally sulphuric spring water, is equal parts holy thermal bath and popular family getaway for Ashgabat-based locals. Sixty meters below ground level, a long narrow lake disappears into the darkness of a deep cave which also houses Central Asia’s largest bat colony. For foreign visitors especially, Kow-Ata is a fascinating chance to interact with local tourists as much as to experience the natural surroundings.

Yangikala (Fire Fortress) Canyon, named for the ruddy red and orange hues of the cliffs in this remote corner of Turkmenistan, is a spectacular destination for off-road jeep tours and hiking trips alike. Climbing to the top of these ridges carved out long ago by the lapping waves of an ancient sea, views stretch for kilometers over the surrounding flat terrain. Visitors who make time to camp in the area experience sunrise and sunsets in which the ochre rocks of the region light up to match the blazing name of the region.

To follow in the footprints of the ancients themselves, head towards the Köýtendag Nature Reserve in the far east of Turkmenistan. Atop the ‘Dinosaur Plateau’ are more than 150 fossilized footprints believed to belong to Iguanodon, Megalosaurus or Tyrannosaurus Rex from the Jurassic era. The largest, more than 70 centimetres long, display the immense scale of these creatures that left their mark on what was once an ancient lakebed. 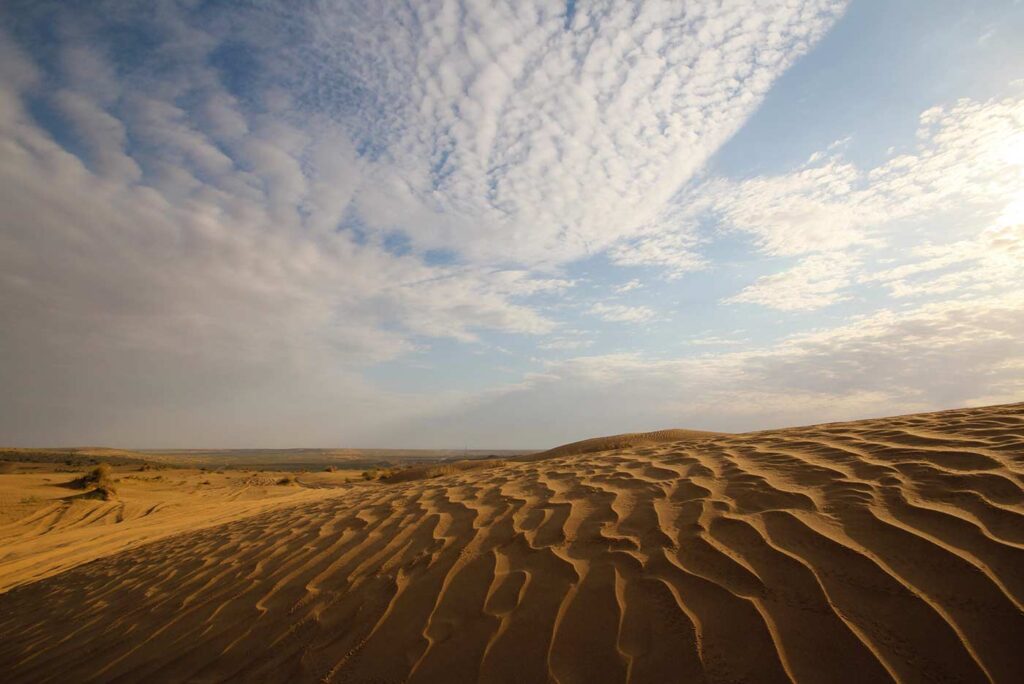 To find more information and inspiration for traveling in Turkmenistan, visit the website of the former State Committee for Tourism.

Chamber of commerce and industry of turkmenistan