Best-known for a traditional nomadic culture and rugged mountain landscapes, the Kyrgyz Republic is a trending destination for adventure and cultural tourism that features regularly on lists such as Lonely Planet’s Best in Travel (featured in the Top 10 Countries to Visit in 2019) and Wanderlust Travel Magazine’s Reader Travel Awards as the Top Emerging Destination for 2020.

With the successful launch of the World Nomad Games event from 2014-2018, the Kyrgyz Republic tourism sector’s association with nomadic lifestyles has become a fundamental factor in visitors’ expectations and experiences – and is now regularly built into branding and marketing strategies across the country. Most Western travellers come hoping to sleep in yurts and get a glimpse of the lives of the shepherds who spend summer deep in the Tien Shan mountains that dominate the country, while visitors from Russia and Kazakhstan gravitate towards the sandy beaches and raucous nightlife of Issyk Kul lake’s northern shore.  Whatever the destination, there are mountain views for days and countless reminders of the nation’s nomadic past.

The Kyrgyz Republic is widely lauded for its mountainous landscapes – the country is home to three peaks higher than 7000m, the tallest waterfall in Central Asia, and high altitude lakes that are among the most popular tourist destinations in the country. Travellers seeking to escape the bustle of busy cities are spoiled for choice – every corner of the country is home to immense beauty, and much of it is reachable with very little effort.

Son Kol, a massive 270km² alpine lake surrounded by lush pasture land, is among the Kyrgyz Republic’s most popular destinations. Yet, far from the nearest villages in Naryn and at a chilly 3000m, the calm quiet atmosphere and unblemished night sky make every visit here feel like a trip to the edge of the map.

Ala Archa National Park, the first established in the country, is among the easiest outdoor getaways in the Kyrgyz Republic at less than an hour away from capital city Bishkek. Popular with trekkers and rock climbers keen to explore the many small side valleys that branch off the main Ala-Archa river valley, the area is also extremely popular with local families and foreign tourists looking to get out of the city for a day to picnic and stroll in the fresh mountain air.

Engilchek Glacier, the longest in the country at a stunning 60km, stretches from below the massif that includes peaks Jengish Chokusu (7439m) and Khan Tengri (7010m). Visitors can hike up the glacier along the eponymous valley, making several crossings or smaller side glaciers en route, or elect to fly in by helicopter alongside mountaineers attempting to reach summits of the two major peaks or a bevy of others nearby.

Sary-Chelek lake, at the center of the Sary-Chelek Nature Reserve in Jalalabad, is as noteworthy for the abundance of plant and animal species in the area as it is for sheer beauty. Ringed by lush forests and steep cliffs, the 50km² lake is one of only a handful of such size in the mountains of the Kyrgyz Republic that are easily accessible by car, and as such it sees plenty of domestic tourists from surrounding Jalalabad and Osh oblasts.

Shaar Waterfall, in the At-Bashi region of Naryn, is the tallest in all of Central Asia at nearly 400m. Accessible by an easy 10km trek, this rarely-visited attraction makes an excellent destination for photographers and nature lovers looking to get away from the country’s more popular highlights. 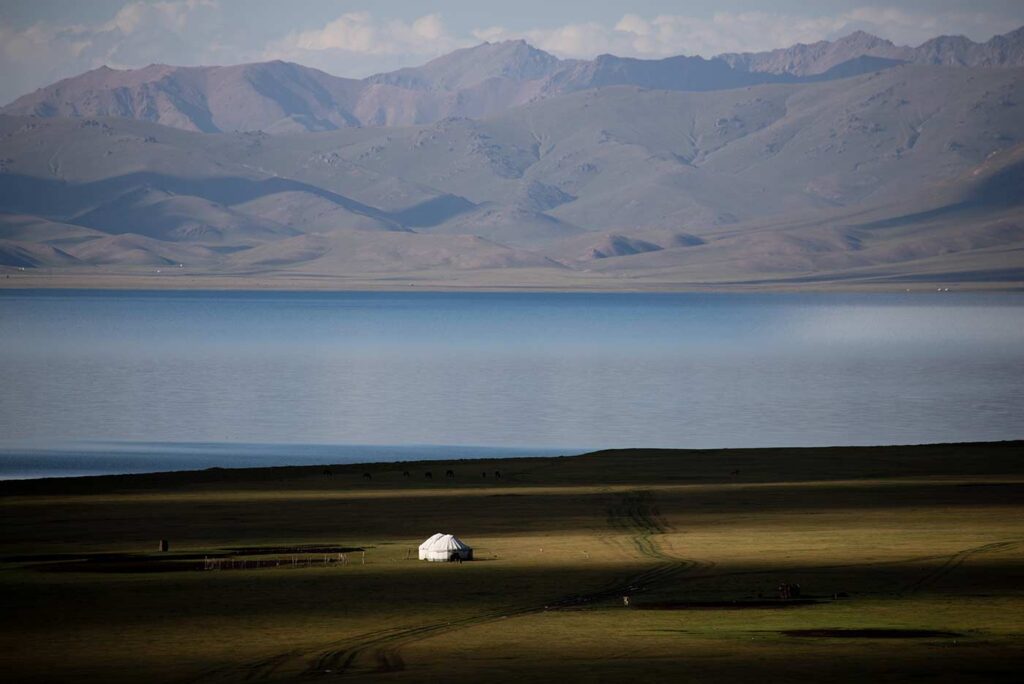 How to Get to Sary-Chelek, Kyrgyz Republic

Top 9 Interesting Things to Do in Kyrgyz Republic 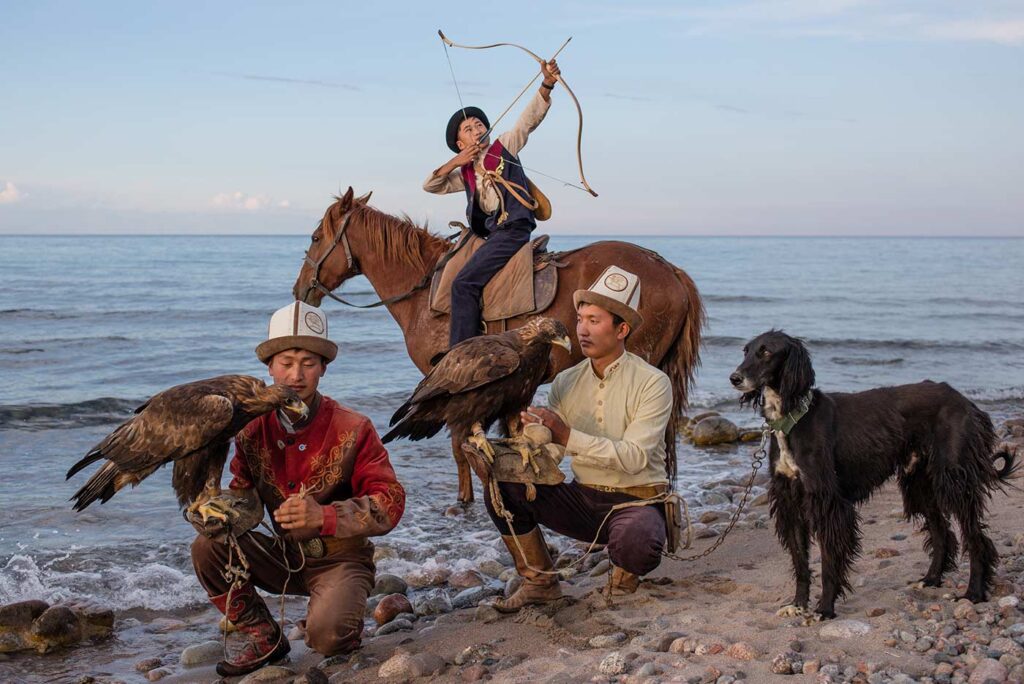 Start the morning with kumis (fermented horse milk), spend the day on horseback exploring remote valleys or rounding up livestock, and spend the evening wrapped in warm blanks as the stars shine brightly through the yurt’s tunduk roof. Few destinations offer the opportunity to immerse as completely in the life of nomadic civilizations as the Kyrgyz Republic, and tourists love it.

Nothing speaks to the life of a Kyrgyz nomad like a day spent in the saddle, and options for travellers range from daytrips to multi-week rides – a few hardy travellers even purchase their own horses at busy livestock markets in Karakol and Tokmok to ride right across the country on their own!

Yurt stays are available across the country, ranging from basic overnights with shepherds high in the mountains to glamping resorts at Son Kol and a little bit of everything in between. Though the level of luxury and authenticity may vary across the range of options, the feeling of remote isolation engendered by the felt walls and woollen blankets of a yurt stay make for a memorable experience at any level.

Some aspects of local culture are, of course, best left to the masters. The tradition of Salbuurun, ancient hunting techniques kept alive by a few dedicated practitioners, involve archery and hunting dogs and (most famously) carefully trained golden eagles raised from birth to aid in catching food and protecting livestock. The practice remains strongest on the South Shore of Issyk Kol, where the Salbuurun Federation can put together shows upon request demonstrating these activities for visitors.

An Introduction to the Cuisine of Kyrgyz Republic

Living With the Nomads at Son-Kol Lake

Adventure in the Tien Shan

The first major group of tourists to travel to the Kyrgyz Republic – at least as far back as the explorer Nikolay Przhevalsky in the early 1800s – were those looking for exploration and adventure. Tourism here still leans heavily towards adventurous options, whether rock climbers or freeride skiiers, trekkers or mountaineers. Options abound, and visitors are primarily confronted with important questions: how much time do you have and just how far are you willing to go?

Trekkers in the Kyrgyz Republic are spoilt for choice – there are far more mountains and gorge to hike than could be crammed into one lifetime. Among the best, however, is the Ak-Suu Transverse. Starting from ecotourism hub Destination Jyrgalan and continuing over 8 high passes past at least as many alpine lakes, this is a top trekking experience that also takes in trekkers’ favorite lake Ala-Kul.

Mountaineers have quite a range of options as well, but Peak Lenin is the obvious standout. Considered among the easiest of the world’s 7000m peaks, with little need for technical climbing skills (but no small amount of stamina) necessary to make this multi-day climb of more than 3600m from Base Camp to Peak Lenin.

Rock climbers appreciate the diversity of choices available as well, with Ala Archa’s Ratsek Hut a popular starting point for routes above the Ak-Sai glacier. Further afield, the Karavshin Valley in Batken is considered a ‘paradise’ among climbers – but requiring two to three weeks to properly explore, it’s only for the truly dedicated.

Though still nascent, winter tourism in the Kyrgyz Republic is quickly growing in popularity as well. Karakol Ski Base is the country’s top destination for piste skiing, freeride skiiers and boarders prefer remote valleys in southern Issyk-Kol and Osh’s Alay region for off-piste adventure on untouched powder. 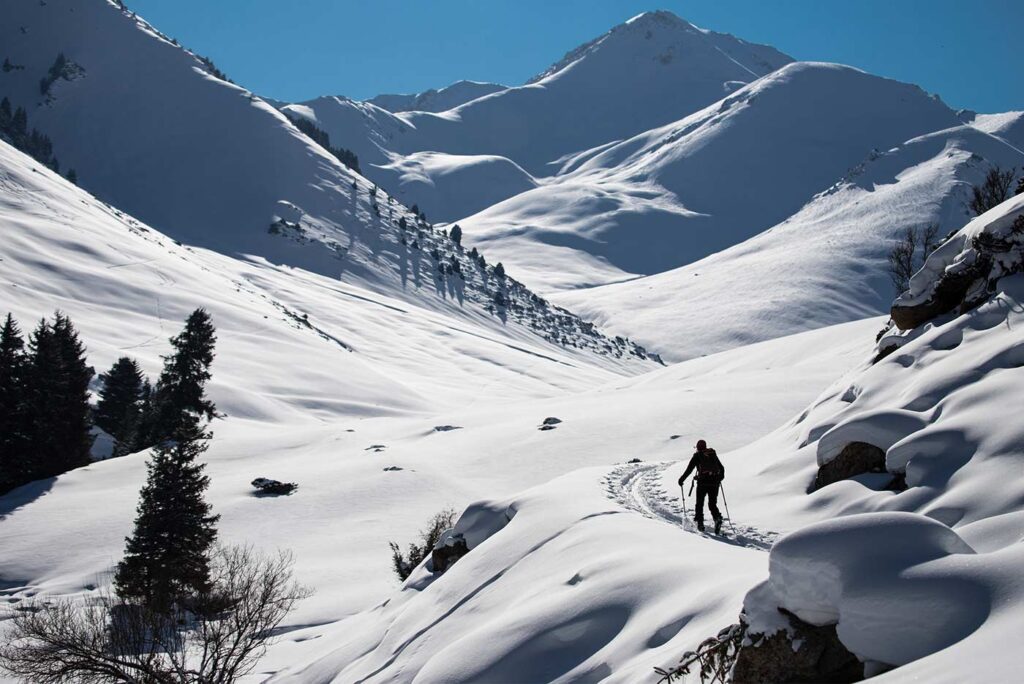 A lone freeride skier ascends Boz-Uchuk Valley for an afternoon run in the mountains near Karakol.
© Stephen Lioy

Climbing Lenin Peak: The Mountain, The Mystique, and the Very Misleading

The Ultimate Guide to Skiing in Kyrgyz Republic

Strategically located at the crossroads between Europe and Asia, this landlocked mountainous country is a recognized trade center and has the potential to become a regional transport and logistics hub. The abundance of mineral resources has begun to attract large foreign investments, and the unpolluted natural landscapes are attracting more and more tourists. In addition, Kyrgyz Republic  has a significant untapped potential for renewable energy sources.

Presently, Kyrgyz Republic is a party to bilateral agreements on mutual support, encouragement and protection of investment (capital expenditure) with more than 20 countries, including USA, Germany, Switzerland, Kazakhstan, Russia, China, India, South Korea and others.