The largest country and economy in Central Asia, Kazakhstan’s global reputation revolves around oil and commerce far more than tourism and adventure. Visitors to the country, then, are often surprised by the many possibilities to get way off tourism’s beaten track for world class hiking and skiing in the Tien Shan and Altai mountains, otherworldly landscapes in the deserts bordering the Caspian Sea, and even timeless drowned forests in the mountain lakes of Kaindy. No matter the season and regardless the type of adventure you’re looking for, Kazakhstan has it and it’s better than you expect.

If your only image of Kazakhstan is horses running on the wide-open steppes, think again. The Tien Shan and Altay are a playground of mountains, lakes, and canyons for nature lovers while the early 19th-century buildings of Almaty and modern starchitect constructions of capital city Nur-Sultan are a joy for architecture enthusiasts. Dreaming of the cosmos and space exploration? Head to the space town of Baikonur to see a manned rocket launch in person.

While Charyn Canyon near Almaty is a popular tourist destination (and rightfully so – it is often described as the ‘Grand Canyon of Central Asia’), the cerulean lakes of Kolsai and drowned forest of Kaindy are natural wonders with very few crowds. Afterwards, head back to Almaty via the Tamgaly Canyon’s Tamgaly-Tash Buddhist petroglyphs and abandoned ‘Nomad’s Land’ film set or continue east to the Singing Sand Dunes of Altyn-Emel National Park.

Near the southern city of Shymkent, popular as a jumping-off point for the ancient fortress at Sauran and Yasaui Mausoleum in Turkestan, the UNESCO-listed Biosphere Reserve at Aksu-Zhabagly is an easily-accessible natural escape to Kazakhstan’s first national park. Popular with birders, hikers, and rock climbers alike, it’s an excellent addition to any Southern Kazakhstan itinerary.

In the far east, stretching along the border with Russia and China, travellers can get all the way off the beaten track in the Altay mountains. This remote region is a paradise of glaciers and peaks, quaint village and ancient petroglyphs, and tons of self-organized skiing and trekking. 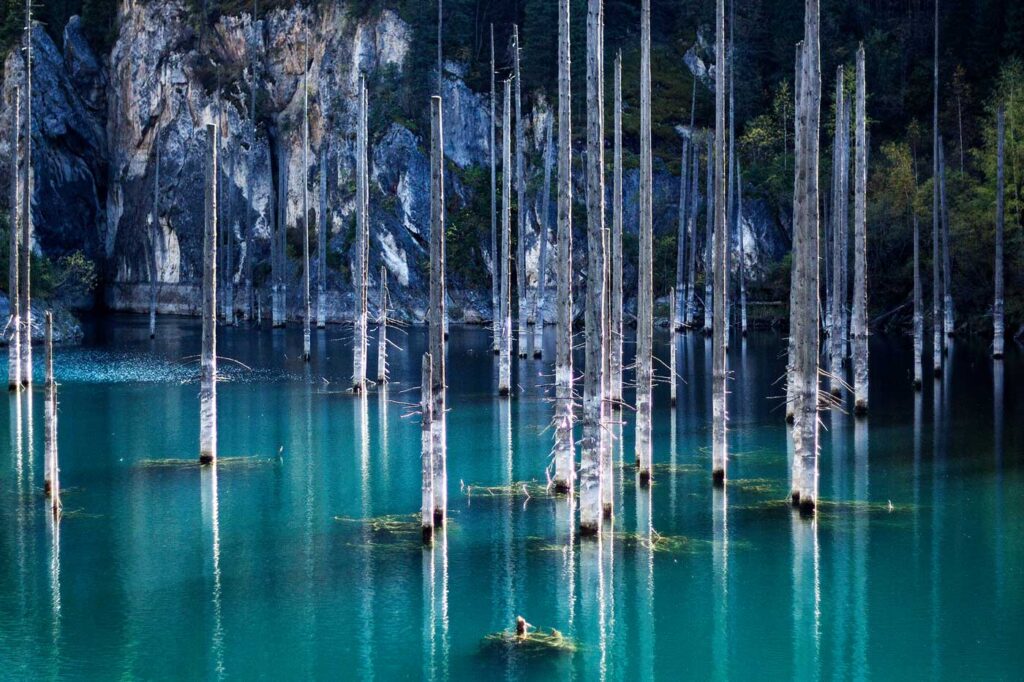 Top Things to do in Southeast Kazakhstan

32 Photos that will put Kazakhstan on your Bucket List 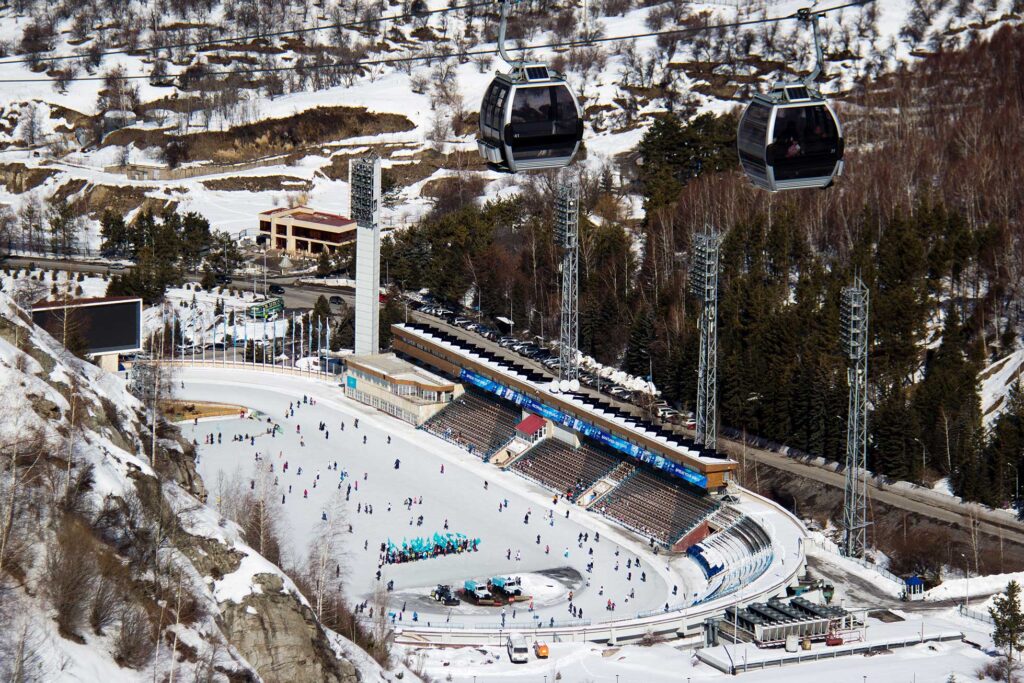 Scenic views from the Shymbulak cable car above Medeo near Almaty.

Exploring the mountains of Kazakhstan isn’t limited to the summer season – ski bases across the country keep the adventure going year-round with Central Asia’s best ski resort at Shymbulak and an incredible array of freeride opportunities across the country.

Shymbulak Mountain Resort’s 8 pistes are the most popular in Kazakhstan by far. Not only are they served by international-quality services and infrastructure, but at less than 20km outside the city it’s easy to spend a half-day or weekend evening on the slopes and still be back to the city in time for an après-ski.

Below the Shymbulak resort (and connected by a scenic cable car ride) is the Medeu ice skating rink – claimed to be the highest in the world. During the Soviet period many world records were set by skaters here, and it attracted top athletes from across the USSR. Though still home to high-level events (including the 2011 Winter Asian Games and 2012 Bandy World Championships), the rink now sees far more visits from the families of Almaty looking for a day out in the mountains.

For resort-based skiers looking to explore beyond Almaty, a number of other options exist in Kazakhstan for getting out into the powder. Near the city of Ust-Kamenogorsk, the ski bases of Nurtau and Altay Alps both offer good value and excellent conditions but see far fewer international visitors. For cross-country skiers, the gentle slopes and wintry forest lakes of Borovoe in the north of Kazakhstan make an attractive holiday destination.

Beyond Kazakhstan’s ski bases, the Tien Shan and Altay mountains are also wide-open for freeride and heliski opportunities for experienced skiiers and snowboarders. This terrain is only for the experienced, but for those with the skills it’s untouched powder with endless potential.

Even more unexpected are Kazakstan’s vast deserts, and the many scenic natural and religious sites scattered throughout. East of the Caspian and west of the Aral Sea, the Ryn desert is home to very few people in sparsely-populated and widely-scattered villages, but numerous pilgrimage sites that attract the faithful and historical sites that bring the curious from far away.

The Mangistau region’s renown is strongest among religious pilgrims, who visit the underground mosques and necropoles of Beket-Ata, Sultan Epe, and Shapak-Ata in search of the blessings of the long-deceased holy men that founded these places of worship. En route they pass a succession of out of this world landforms that have, no doubt, contributed to Mangistau’s reputation as a mystical land popular with Sufic sects.

Sherkala, the Lion’s Castle, is said to still hold at its summit a fortress in which Genghis Khan’s eldest son Zhoshy of the Golden Horde once made his base. Difficult to climb, the 332m-high mountain is said to be even harder to descend, but locals describe a tunnel that ascends directly to the peak – perhaps the same secret access that Zhoshy’s warriors once used to return to their eyrie. Nearby, a few walls of the 13th-century settlement at Kyzylkala still stand as poignant ruins in the empty desert, and the small waterfall-fed stream of the Samal Canyon is popular as a picnic stop or daytrip for domestic tourists.

The Torysh Valley (usually referred to in English as the ‘Valley of the Balls’) is the site of the unusual geological process of concretion, in which ground minerals are triggered into forming a dense mass of rock around a central core. This wide open plain of spherical rocks – some several meters high – feels more like a scene from science fiction than real life.

Guarded by towering rock plinths, the Karagiye Depression is the lowest place in the former USSR at 132m below sea level. Thought to be the site of an ancient salt lake, visitors come now for the fantastical rocky outcrops and to visit small Karakol lake. 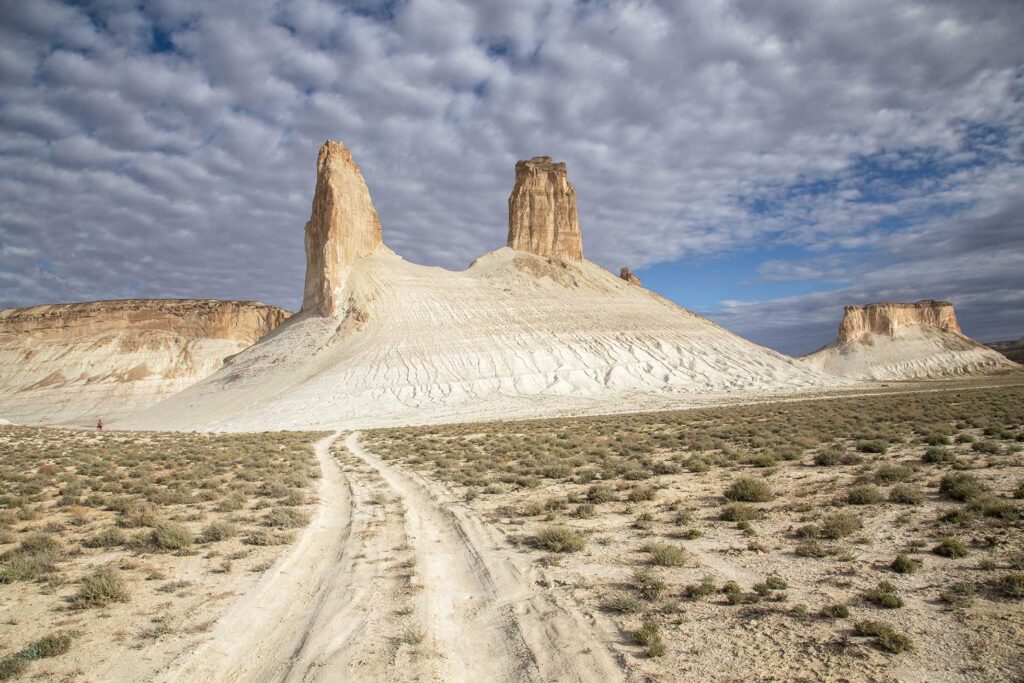 Extraordinary Mangystau: Into the Wild

Mangistau: To Kazakhstan Through the Back Door

The Underground Mosque of Shakpak Ata

Since gaining its independence in 1991, Kazakhstan has made significant progress toward creating a market economy and has managed to achieve substantial results in attracting foreign investment into priority sectors of the economy. According to the National Bank of Kazakhstan, over the years of Independence, total gross inflow of foreign direct investment into Kazakhstan’s economy amounted to about $ 350 billion.[1] By maintaining an active dialogue with foreign investors, Kazakhstan is making great progress towards diversifying the country’s economy by improving the investment climate. These efforts were reflected in the World Bank’s annual Doing Business Report, where Kazakhstan ranked 25 out of 190 countries in the world in 2020. [2],[3]

Kazakhstan, because its geographical location and vast natural resources, identified t transport and logistics, machinery, energy, agriculture and tourism as priority sectors for foreign investment. Accordingly, the government of Kazakhstan announced significant support measures to create a favorable investment climate, such as establishing 13 Free Economic Zones with 0% corporate income tax and 22 industrial zones, and visa-free travel for citizens of 73 countries[4]. Moreover, Kazakhstan officially opened the Astana International Financial Center (AIFC) to offer foreign investors an alternative jurisdiction for operations, with tax holidays, a common law-based legal system and flexibility to carry out transactions in any currency. [5]